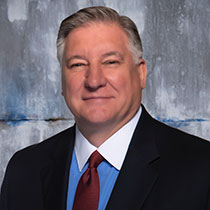 Ron Romines was appointed Senior Vice President and Regional Manager in June of 2019. Prior to his appointment, he served as Vice President and General Manager of WTEN-TV in Albany, New York where he was also responsible for managing Nexstar’s relationship with Shield Media’s WXXA-TV. Mr. Romines first joined Nexstar in January 2017 when the Company acquired various assets of Media General. With nearly three decades of broadcasting and sales management experience, Mr. Romines transformed Nexstar’s Albany station operations into a position of market leadership while achieving record revenue and digital metrics.

Prior to WTEN-TV, between 1995 and 2005 Mr. Romines served in various General Sales Management roles on behalf of WJTV-TV (CBS) and WAPT-TV (ABC) in Jackson, MS; WCCO-TV (CBS) in Minneapolis, MN and KOCO-TV (ABC) in Oklahoma City, OK. He began his broadcasting career in 1991 as a Local Account Executive at WDBD-TV (FOX) in Jackson, MS. Mr. Romines earned a BSBA and MBA from Mississippi College. He is married to Joneen and they have a son and a daughter, Brad and Ashley.