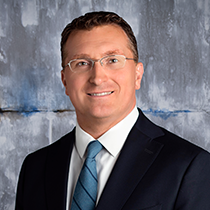 As Head of Tribune’s Programming department in 2011, Mr. Compton created Antenna TV.  Antenna TV has become one of the country’s fastest growing networks. In 2016, he brought Johnny Carson back to late night, which was the first time the show had been seen on air in a strip since Carson retired in 1992.

Mr. Compton spent 18 years in radio as VP of programming for Clear Channel Radio & Premiere Radio Networks before joining Tribune.  While at Premiere, he created and developed radio programs and features built around high-profile talent such as Donald Trump, Whoopi Goldberg, Bob Costas, Casey Kasem and Ryan Seacrest. Mr. Compton was also responsible for the acquisition of Sean Hannity for Premiere Radio Networks, one of the most listened to programs in the US.

He and his wife Rita have been married 18 years and have 3 sons.