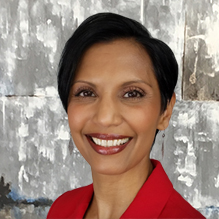 Bina Roy was promoted to Vice President and General Manager of Nexstar Media Inc.’s multicast networks in February 2022. She is responsible for business development and affiliate partnerships with more than 15 networks providing programming across the company’s portfolio of more than 600 subchannels.  She will also oversee efforts to maximize the use of Nexstar’s broadcast spectrum in 116 television markets across the country.

Ms. Roy has served as Senior Affiliate Sales Director for the Networks Division since September 2019. In that role, she oversaw the daily operations of Nexstar’s two owned and operated multicast networks, Antenna TV and Rewind TV.  She was instrumental in the launch of both networks and has grown their distribution significantly.

Before joining Nexstar, Ms. Roy served as Programming and Affiliate Manager for Tribune Broadcasting.  In that role, she played pivotal roles in the creation of the CW Network’s talk show, “The Bill Cunningham Show,” as well as the syndicated news programs, “Eye Opener” and “News Fix.”  She was also responsible for regional syndication broadcasts for the Chicago Cubs, White Sox, and Blackhawks.

Ms. Roy got her start in television broadcasting as an NBC Page in 1996.  Her career has taken her to war zones as a producer for CBS News Productions and into homes as newspaper columnist, national radio host and a local television reporter and anchor.  Ms. Roy attended Middlebury College and earned her MBA from Iona College.