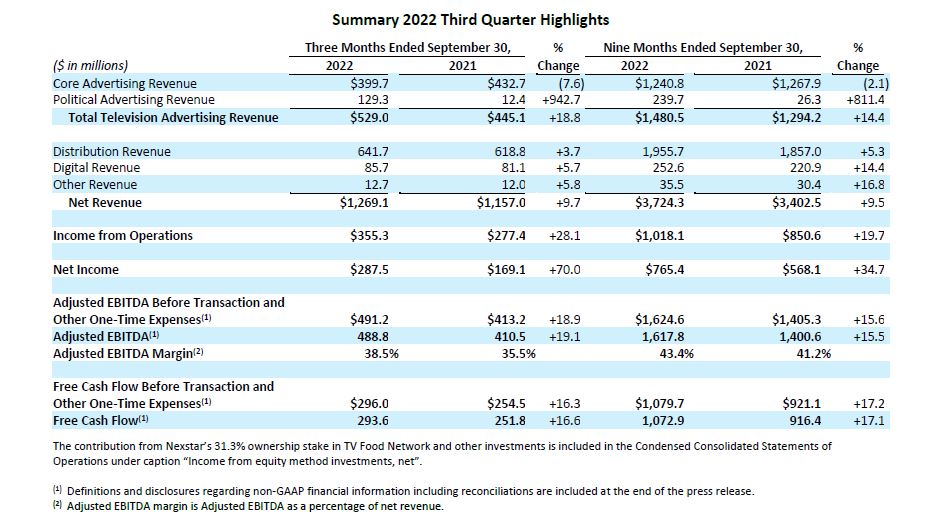 “Nexstar’s results continue to benefit from our diverse, scaled, efficient and low leverage business model.   Over 50% of revenue is contractual and from non-advertising sources and approximately 70% of our core advertising is from local advertisers which are historically more consistent in their spend throughout economic cycles.  Nexstar has built an unparalleled local moat with more than 1,500 local sellers and 40,000 advertiser relationships in the 116 local markets we serve across America. In addition, we are extremely well positioned to continue to benefit from record levels of political advertising spending which is not dependent on the economy.

“We expect the fourth quarter to benefit from a continuation of strong political advertising trends while 2023 will see distribution revenue upside from renewals of agreements representing more than half of our subscribers.  Looking forward, we expect 2024 to benefit from another record year for political advertising due to the presidential election combined with the benefit of another wave of distribution agreement renewals for approximately 40% our subscribers.

“Longer-term, we believe implementing our plans for The CW Network, growing NewsNation and progressing towards the monetization of our spectrum through the deployment of ATSC 3.0 technology will complement our other growth initiatives to support the further enhancement of shareholder value.”

The table below summarizes the Company’s debt obligations (net of financing costs, discounts and/or premiums).

Third Quarter Conference Call
Nexstar will host a conference call at 10:00 a.m. ET today. Senior management will discuss the financial results and host a question-and-answer session. The dial in number for the audio conference call is +1 929-477-0402, conference ID 6574015 (domestic and international callers). Participants can also listen to a live webcast of the call through the “Events and Presentations” section under “Investor Relations” on Nexstar’s website at nexstar.tv. A webcast replay will be available for 90 days following the live event at nexstar.tv.

Definitions and Disclosures Regarding non-GAAP Financial Information
Adjusted EBITDA is calculated as net income, plus interest expense (net), loss on extinguishment of debt, income tax expense (benefit), depreciation of property and equipment, amortization of intangible assets and broadcast rights, (gain) loss on asset disposal, impairment charges, (income) loss from equity method investments, distributions from equity method investments and other expense (income), minus reimbursement from the FCC related to station repack and broadcast rights payments. We consider Adjusted EBITDA to be an indicator of our assets’ operating performance and a measure of our ability to service debt. It is also used by management to identify the cash available for strategic acquisitions and investments, maintain capital assets and fund ongoing operations and working capital needs. We also believe that Adjusted EBITDA is useful to investors and lenders as a measure of valuation and ability to service debt.

Free cash flow is calculated as net income, plus interest expense (net), loss on extinguishment of debt, income tax expense (benefit), depreciation of property and equipment, amortization of intangible assets and broadcast rights, (gain) loss on asset disposal, stock-based compensation expense, impairment charges, (income) loss from equity method investments, distributions from equity method investments and other expense (income), minus payments for broadcast rights, cash interest expense, capital expenditures, proceeds from disposals of property and equipment, and operating cash income tax payments. We consider Free Cash Flow to be an indicator of our assets’ operating performance. In addition, this measure is useful to investors because it is frequently used by industry analysts, investors and lenders as a measure of valuation for broadcast companies, although their definitions of Free Cash Flow may differ from our definition.

For a reconciliation of these non-GAAP financial measurements to the GAAP financial results cited in this news announcement, please see the supplemental tables at the end of this release.

With respect to our forward-looking guidance, no reconciliation between a non-GAAP measure to the closest corresponding GAAP measure is included in this release because we are unable to quantify certain amounts that would be required to be included in the GAAP measure without unreasonable efforts. We believe such reconciliations would imply a degree of precision that would be confusing or misleading to investors. In particular, a reconciliation of forward-looking Free Cash Flow to the closest corresponding GAAP measure is not available without unreasonable efforts on a forward-looking basis due to the high variability, complexity and low visibility with respect to the charges excluded from these non-GAAP measures.  For example, the definition of Free Cash Flow excludes stock-based compensation expenses specific to equity compensation awards that are directly impacted by unpredictable fluctuations in our stock price.  In addition, the definition of Free Cash Flow excludes the impact of non-recurring or unusual items such as impairment charges, transaction-related costs and gains or losses on sales of assets which are unpredictable.  We expect the variability of these items to have a significant, and potentially unpredictable, impact on our future GAAP financial results.

Forward-Looking Statements
This communication includes forward-looking statements. We have based these forward-looking statements on our current expectations and projections about future events. Forward-looking statements include information preceded by, followed by, or that includes the words “guidance,” “believes,” “expects,” “anticipates,” “could,” or similar expressions. For these statements, Nexstar claims the protection of the safe harbor for forward-looking statements contained in the Private Securities Litigation Reform Act of 1995. The forward-looking statements contained in this communication, concerning, among other things, future financial performance, including changes in net revenue, cash flow and operating expenses, involve risks and uncertainties, and are subject to change based on various important factors, including the impact of changes in national and regional economies, the ability to service and refinance our outstanding debt, successful integration of business acquisitions (including achievement of synergies and cost reductions), pricing fluctuations in local and national advertising, future regulatory actions and conditions in the television stations’ operating areas, competition from others in the broadcast television markets, volatility in programming costs, the effects of governmental regulation of broadcasting, industry consolidation, technological developments and major world news events. Nexstar undertakes no obligation to update or revise any forward-looking statements, whether as a result of new information, future events or otherwise. In light of these risks, uncertainties and assumptions, the forward-looking events discussed in this communication might not occur. You should not place undue reliance on these forward-looking statements, which speak only as of the date of this release. For more details on factors that could affect these expectations, please see Nexstar’s other filings with the Securities and Exchange Commission. 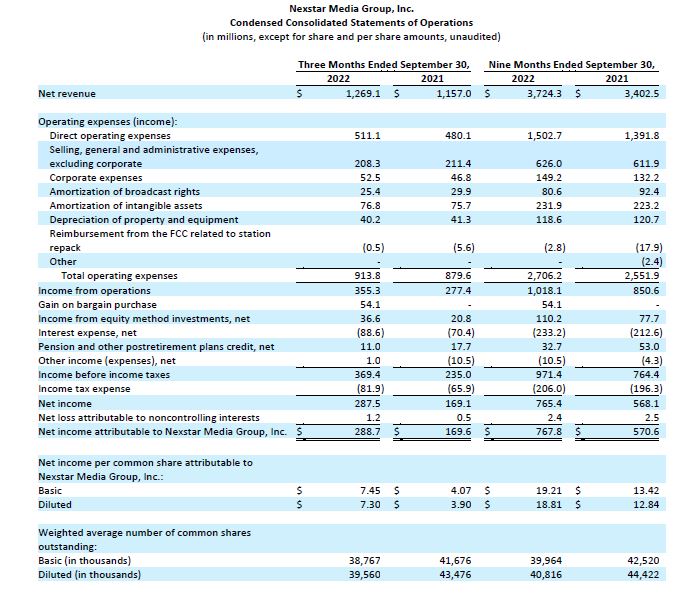 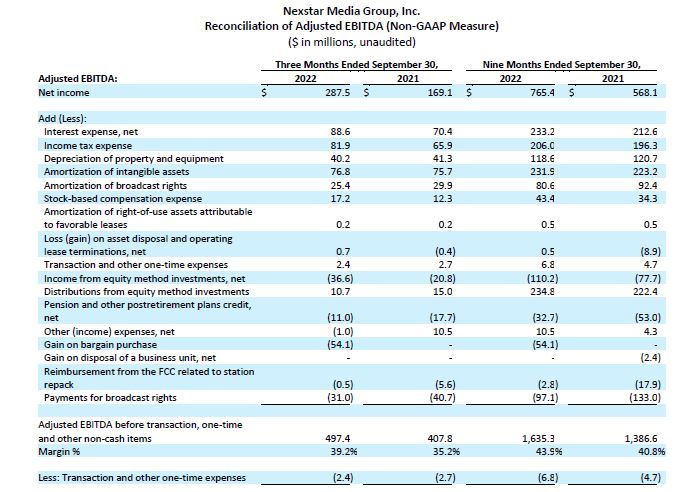 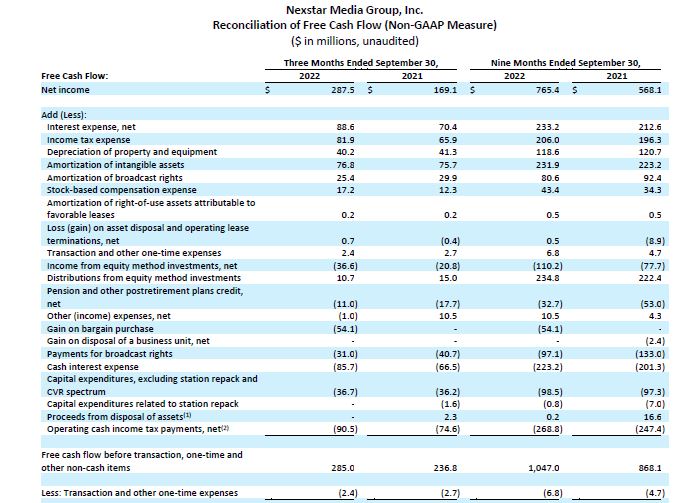