Chris Cuomo and Leland Vittert will lead Election Night Coverage along with commentary and analysis by George Will, Chris Stirewalt and a team of political professionals across the country

Broadcasting from its headquarters in Chicago, and telecast to 70 million television households and streamed throughout the country, America’s fastest growing cable news network’s election night coverage will begin at 6pm ET/5pm CT with live continuous reporting until 3am ET/2am CT.

In order to provide the most up to date election results and race calls, NewsNation has partnered with Decision Desk HQ to provide independent analysis and race projections for the 2022 Elections.

For the first time, Decision Desk HQ, led by their head of Data Science, Scott Tranter will be setting up their independent race call center on-site in NewsNation’s studio in Chicago. It’s a rare behind-the-scenes look at the race call operation. Tranter and his team will be providing on-air insights throughout the night about how the night’s most important race calls are made.

In 2020, Decision Desk HQ, one of only three organizations nationally to collect and provide election results to news organizations, was the first to call the election for Joe Biden as the 46th president of the United States.

“We are excited to bring viewers the most comprehensive coverage of election night anywhere, as our team anchors the newscast from the heartland of America,” said Michael Corn, President of News at NewsNation. “After providing exclusive national coverage of candidate debates in Georgia, Texas, and Pennsylvania, NewsNation is preparing to deliver election night results with a level of transparency and detail never before seen on TV.”

The Hill’s associate editor, Niall Stanage, will be on location in Chicago along with Morgan Ortagus, former spokesperson for the U.S. Department of State. Providing commentary from their Washington D.C. bureau will be The Hill’s editor in chief Bob Cusack and correspondent Julia Manchester.

NewsNation’s Washington Bureau Chief Mike Viqueira will be reporting live from the White House with additional coverage in the nation’s capital from correspondent Tom Dempsey. NewsNation’s National Correspondent Kaleigh Beeson will report on ballot initiatives across the country.
NewsNation also will harness the power of thousands of Nexstar local journalists in cities across the country to deliver the very best on the ground coverage of the most important races.

Decision Desk HQ, the leading provider of non-partisan U.S. and international election results and related data, provides state by state results data and serves as the NewsNation ‘Decision Desk’ for all senate, house and statewide primary and general election races.

The network will have reporters situated in key battleground states along with the support of Nexstar’s local television stations that have been on the ground of the campaign from the beginning.

About NewsNation
NewsNation is a national news and entertainment cable network reaching 70 million television households across the United States. Formerly known as WGN America, the network is owned and operated by Nexstar Media Inc., a wholly-owned subsidiary of Nexstar Media Group, Inc. (Nasdaq: NXST). NewsNation is America’s source for unbiased news, where engaged citizens get news that represents the full range of perspectives across the country. The network draws on the local market, regional and national expertise of Nexstar’s 5,500 local journalists in 110 local newsrooms across the country. NewsNation is available across a variety of cable and satellite providers, streaming platforms, online, and on the NewsNationNow app. 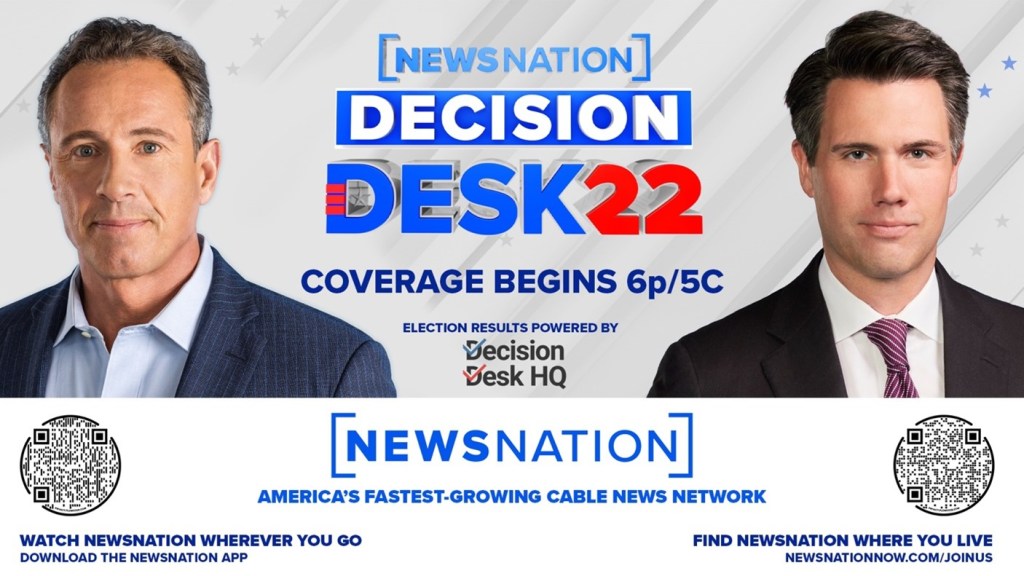